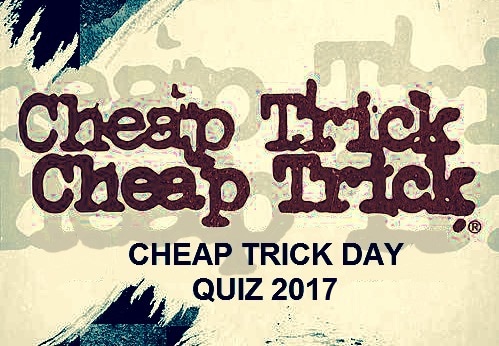 We received quite a number of responses to this year's CT Day Quiz, and while it might have appeared difficult, a very large number of the participants achieved high scores - missing on average only 3-4 answers, a much higher "correct" score than in past years (and quite a few 20/20 scores)!  Thank you to all who participated.

Here are the winners:

2 GRAND PRIZE WINNERS:
Each winner will receive 2 tickets and VIP meet and greet access (includes a photo with the band at the meet and greet) to one show of their choice


Special thanks to Darran Prosser and Kim Gisborne.

HERE ARE THE QUESTIONS (& ANSWERS):
Cheap Trick had the honor of working with the late, great Sir George Martin. What song was his favorite from the album he produced for them?
“World’s Greatest Lover” (source: from liner notes of Expanded Edition of All Shook Up)

On April 8, 2016 Cheap Trick was inducted into the Rock & Roll Hall of Fame. Who was the very first artist to be inducted, i.e., the first of the initial year’s “class”?
Chuck Berry in 1986 (source: https://rockhall.com/inductees/ceremonies/1986/)

In the video for “Can’t Stop Fallin’ Into Love,” a natural phenomenon alters the ecology of a town in which state?
Alaska (newspaper headline at end of video)

Name the non-band member who co-wrote the tenth track on Cheap Trick’s 15th studio album.
Bill Lloyd (source: “Dream the Night Away” on the Rockford album)

Cheap Trick released a white t-shirt in 1998, promoting the “3-album” shows that were played in various cities that summer. The front graphic featured 3 monkeys, but how many cities are listed on the back of this shirt?
Nine (9)   (source:   http://www.ctnewseurope.co.uk/clothing.htm )

How many limited edition cassette copies of the “Trickfest 1” recording were released?
125  (source:  http://www.ctnewseurope.co.uk/other_collectables.htm )

On Record Store Day 2016, the band released a 10” vinyl record titled Found New Parts. The applause track from shows in which city were used on the Beatles tune Cheap Trick covered on the first 10” vinyl EP?
Chicago (source: from liner notes of Expanded Edition of All Shook Up/Found All the Parts)

What was the original title of the song “A Place in France”?
“Mama Won’t Let You” (source: booklet in Sex.America.Cheap Trick box set)

In the video for “I Can’t Take It” how many layers does the giant wedding cake have?
Five (5)

Who created the cover artwork for The Doctor?
Andre Miripolski     (source: album credits)

Cheap Trick played their first two shows of 1990 in this “cool” place on their first visit to this country, with one of the shows televised. In which city and country?
Santiago, Chile (source: p. 163 of the book Reputation is a Fragile Thing)

What was the full title of the song mentioned above?
“Waiting For The Man/Heroin” (source: Sex.America.Cheap Trick box set)

Only one track on One on One is credited with three co-writers, which song is it?
“Love’s Got a Hold On Me” (source: One on One album credits)

What was Robin’s first rock band at the age of 12?
The Destinations (source: Robin Zander)

How many songs did Cheap Trick play at their Red Rocks, Colorado show in 2015?
27  (source:  "Setlists" section on cheaptrick.com)